The President's Letter from Our Quarterly Newsletter

I wanted to take this opportunity to revisit our financial planning and investment philosophy and overall belief system since it is critical to your success in the future. It is goal-focused, and planning-driven, as sharply distinguished from an approach that is market-focused and current events-driven.

Every successful investor I've ever known was acting continuously on a plan; failed investors, in my experience, by reacting to current events in the economy and the markets.

We prefer not to forecast the economy, nor attempt to time the markets, nor predict which market sectors will outperform others over the next block of time. We are financial planners, not prognosticators. Once we have your plan in place, and have it funded with a well thought out mix of appropriate investments, the ongoing recommendations are designed to tweak or adjust the plan to take advantage of other people's mistakes.

Of course, adjustments will be made if your long-term goals change. We have found that the more often investors change their portfolios (in response to market fears or fads of the moment), the worse their long-term results.

Let's take a moment to review our four essential principals of portfolio management:

Last year was perhaps one of the strangest years I've experienced in my career as a CFP®. Most importantly, it was one of the truly great years in the history of the American economy. Oddly, it was also a year where the equity market could not get out of its own way.

It is almost impossible to site all the major metrics of the economy which blazed ahead in 2018. Worker productivity, which is the long-run key to economic growth and a higher standard of living, surged. Wage growth accelerated in response to a rapidly falling unemployment rate. Household net worth rose above $100 trillion for the first time. Household debt relative to net worth remained historically low. Finally, and this could sum up the entire year, for the first time in American history, the number of open job listings exceeded the number of people unemployed.

Earnings of the S&P 500 companies, paced by robust GDP growth and significant corporate tax reform, leaped upward by more than 20%. Cash dividends set a new record; indeed, total cash return to shareholders from dividends and share repurchases since the trough of The Great Panic reached $7 trillion.

But the equity market had other things on its mind. With all that positive economic and business news, the S&P 500 retreated approximately 6% in 2018 (not including dividends).

As we enter 2019, the major uncertainty is trade policy. In addition, Fed policy and an aging expansion, approaching one decade in length, were weighing heavily on investor psychology as 2018 came to a close. History and experience tell us that negative investor sentiment have usually presented the patient, disciplined, long-term investor who has a purposeful plan, with enhanced opportunity.  As Warren Buffett wrote in his 1994 shareholder letter, "Fear is the foe of the faddist, but the friend of the fundamentalist."

Thank you for your time. 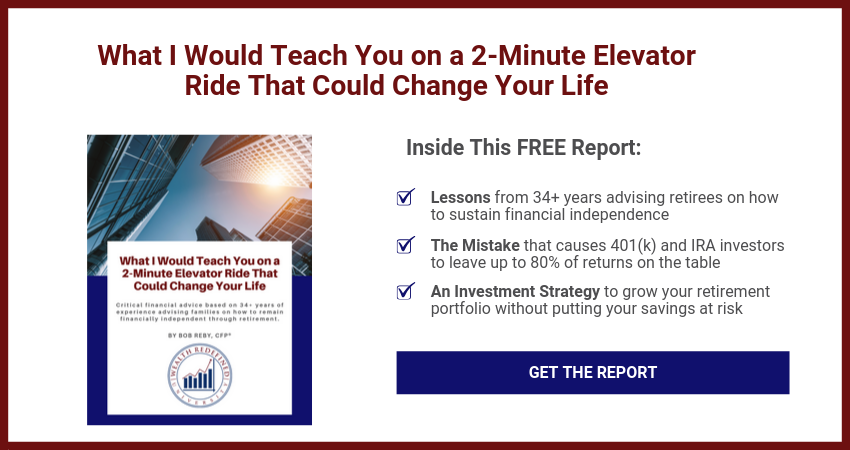 Have Questions About This Topic?

Your health, safety and financial well being remain our top priority.

How we're responding to Covid-19

We will continue to serve you at the highest level. Please do not hesitate to contact us at info@rebyadvisors.com, (203) 790-4949 or an employee's direct line. Whenever needed, we will hold virtual meetings to practice social distancing. If you would like us to contact you, simply complete the form to the right.